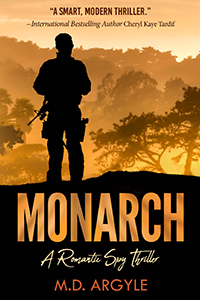 Nick’s life as a CIA spy should be fulfilling, but it has only given him unhappiness—a wife who committed suicide, and two daughters who resent everything he has become. Now, stuck in the Amazon on the last mission of his career, he must track down Matheus Ferreira, a drug lord and terrorist the U.S. has tried to bring down for years. If he succeeds, he’ll have the chance to start his life over again. Just when Nick is on the brink of catching Ferreira, he’s framed for a murder that turns his world upside down. His only chance of survival lies in West Virginia where Lilian Love, a woman from his past, owns the secluded Monarch Inn.